Blog 2020 Blog Posts How I experience life in a township

Lea* from the Netherlands has joined the AIDS Hope team in January 2020 and even though some things are different than expected, she loves living in Mamelodi. Read about how she has been experiencing life in a township: 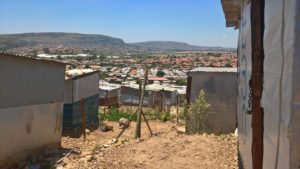 When you think people in Mamelodi speak all the same language you are horribly wrong! People here speak several languages like Sotho, Zulu, Tsonga, Sepedi or Mamelodian. (This is actually not an official language, but a mix of all the different languages.) The fact that they speak so many different languages, but are still able to communicate with each other is really surprising for me. Where  I come from we only have one official language but we are still not able to always understand each other. These many different languages give me a problem though. Before arriving in Mamelodi, my goal was to learn the local languages but since there are so many, the question is which one?

Around the Meetse A Bophelo centre is always something happening.  There is always some noise coming from somewhere. Even during the night, when you want to sleep there is music in the background. In the beginning I really needed to get used to that, but now I miss the music when it’s not there.

The people living in Mamelodi are very warm and they will always greet you. I love driving around to pick up the kids from the schools. When I do so I always come across the same people. First, I smile and wave at the woman in our street who is selling fruits and vegetables. When I get stuck in traffic on the main road, I get the opportunity to talk to the guys who are selling cigarettes and other things. While waiting at the schools for the kids to come out, kids gather around me and marvel at a white person. They always try to talk to me in their home languages, but I obviously can’t communicate with them. When the kids I’ve been waiting for are finally out we drive on to another school.

At the second school I wave at the man with the rod. Apparently, he keeps an eye on the kids while they are waiting to be picked up. Then, I head already to the last school. In the car I have a never-ending discussion with the kids, which road is now the fastest and most comfortable. We are definitely not all on the same page regarding that. On my way back to the centre I greet the same guys again, wave at the same woman and then I enter the gate to Meetse.

I love living here in Mamelodi, but there are some things I thought I would never do. Some of the things are:

This is just a small sneak peek into how life in Mamelodi and at AIDS Hope looks like. There are a lot more things for me to discover and if you want to experience it yourself- come and join us!

The wait is over!

We use cookies on our website to give you the most relevant experience by remembering your preferences and repeat visits. By clicking “Accept”, you consent to the use of ALL the cookies.
Do not sell my personal information.
Cookie SettingsAccept
Manage consent

This website uses cookies to improve your experience while you navigate through the website. Out of these, the cookies that are categorized as necessary are stored on your browser as they are essential for the working of basic functionalities of the website. We also use third-party cookies that help us analyze and understand how you use this website. These cookies will be stored in your browser only with your consent. You also have the option to opt-out of these cookies. But opting out of some of these cookies may affect your browsing experience.
Necessary Always Enabled
Necessary cookies are absolutely essential for the website to function properly. These cookies ensure basic functionalities and security features of the website, anonymously.
Functional
Functional cookies help to perform certain functionalities like sharing the content of the website on social media platforms, collect feedbacks, and other third-party features.
Performance
Performance cookies are used to understand and analyze the key performance indexes of the website which helps in delivering a better user experience for the visitors.
Analytics
Analytical cookies are used to understand how visitors interact with the website. These cookies help provide information on metrics the number of visitors, bounce rate, traffic source, etc.
Advertisement
Advertisement cookies are used to provide visitors with relevant ads and marketing campaigns. These cookies track visitors across websites and collect information to provide customized ads.
Others
Other uncategorized cookies are those that are being analyzed and have not been classified into a category as yet.
SAVE & ACCEPT